From “One is Silver, the Other Gold,” Smart Stepfamilies,  ww.smartstepfamilies.com/view/455 (May 2006)

For the next few winters, the Christmas tree selection became a disappointing power struggle instead of a lively family outing.  Symbolizing this struggle, those first stepfamily years featured either her angel or my star at the top of the tree.  Each year, Brianna or I would concede.  Though we both tried to be fair, neither of us was ever fully satisfied.  “How could her flimsy angel stand up to my venerable star?” I thought.  And no doubt, Brianna considered my time-worn star tacky and meaningless.

The death of her Mom when Brianna was six had interrupted the continuity of many strong, holiday traditions.  As if her ability to remember her Mom depended on it, Brianna clung to such rituals as fresh-squeezed orange juice on Christmas morning.  And, having that angel on the tree.

Still young in my stepparenting journey, I didn’t realize that embracing and continuing those rites would encourage a healthy grieving process, one that recognized old rituals while breaking in new ones.  I was the parent, and I wanted to pull rank.  Yet, the mini-me perched on my other shoulder begged for balance.  I succumbed. “What we need,” I thought, “are traditions that will satisfy us both!” 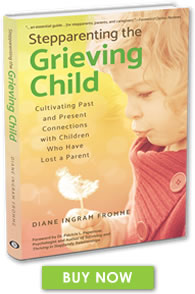